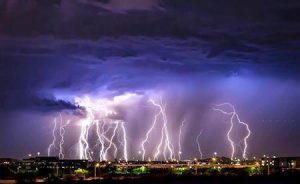 Arizona didn’t experience a very active storm season. Monsoon season runs through the summer months for those of you out of state. There was little rainfall and no epic lighting storms. Well, the little storm that just rolled through here might have made up for the off season. In Arizona when lighting strikes it’s an amazing experience if you are near the point of contact. The entire sky lights up like an alien ship is depending upon you, the rumble from the thunder can sound as if a ship is hovering over head. That is what just happen to me as I dozed off in my lazy boy recliner. There was a massive crack that woke me, but the low rumble of thunder made me wonder if I was dreaming. The frequency level it was on truly made me feel like I was either dreaming or there was an alien ship hovering near in the Arizona sky. I sat up and looked around, the dogs were near and probably had been for the time I was sleeping through the storm. As I gathered my thoughts I heard another crack and the lighting appeared to have struck my rooftop, at least that is what I had thought. With solar panels and satellite dishes connected to the roof there were plenty of metal objects for the lightning to interact with. I thought for sure that I was going to have to hire a roofing contractor. As the storm passed though I made my way up to the roof to inspect the damage. There were some lose shingles from the heavy winds and rains but nothing had been struck by lighting as far as I could tell. I nailed down the lose shingles that were visible and made my way back down the ladder before another round of this storm rolled through. I remember in college I had caught an Arizona monsoon on my cell phone and was blown away by the vibrant and violent ways of an Arizona lightning storm. They are much different then what I are up with and seem to truly hover overhead. Had I been intoxicated, today’s storm would have definitely been an alien invasion! A few glasses of wine and my mind would have gone there. But instead, it took the boring route and concluded it was a thunderstorm. I’ll keep my eyes on the evening skies though just incase.