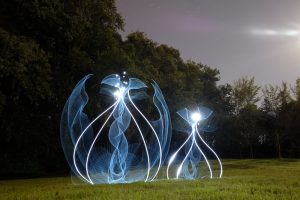 The new year is here and all seems to be rather normal here in Arizona. The only thing lighting up the sky recently was the Space X rocket and fireworks on New Years Eve. That’s what I would like to believe at least. These past few nights have been interesting, not only have my dogs been barking all night long, but the dogs in the neighborhood have been collaborating and barking in unison. There is something in the Arizona air that is not settling well with the dogs. I would normally brush it off if it were my dogs, but this has to be a collective group of about 6-10 dogs throughout the neighborhood all unsettles and stirring and odd hours of the night. I will often wander out into the streets at night and sit quietly. My goal is to pick up any noises or scents that might be abnormal, and of course anything that is visually out of place. Some nights I make it to the roof top and look out over Phoenix and wonder what’s really out there? Is there alien life walking among us? If so, are they any crazier than some of the human lives that roam these streets? I don’t trust anyone, my dogs are my friends, and I got a piece I carry from a Tempe gun shop that will open a hole in a mans chest larger than the gate to hell in Stranger Things. I’m not paranoid, but I do get the feeling that AZ has more hidden secrets than the Kennedy family and I feel a little left out. What on earth are all the dogs troubled by? Is it a frequency traveling through the air at 2am that’s driving them insane? If so, what’s generating it? Is there a thief lurking among us that’s out and about at 2am scoping out his next robbery? If so, I really hope he climbs through my window! This slug has been collecting dust in this chamber and is dying to explode! But what if it’s none of the above? What if there is something traveling above, possibly so fast that it’s not being picked up by radar or human senses. Maybe alien life isn’t visible? There are so many drawings of aliens, but one must wonder, is it possible that alien life could be so advanced that it has taken up a spiritual form, or light form, and has rid itself of an unnecessary physical body? I don’t have the answers to that, but my mind explores more possibilities then Dora the Explorer. I look forward to the day I might encounter alien life forms, until then I’m bringing in the dogs from the outside, this barking at 2am has got to stop!